The two-way cycle lanes in Elm Grove and Kings Road will be separated from other traffic by plastic bollards attached to the road surface, providing extra protection for cyclists.

Segregated cycle lanes on Elm Grove and Kings Road are set to be trialled for three weeks following support from residents but concerns from local businesses.

Following engagement activity on proposals for the new cycle lanes, Portsmouth City Council has tried to strike a balance between views from different parts of the community.

Liberal Democrat councillors pushed for these roads to be included in a successful bid for funding from the government's 'Emergency Active Travel Fund' to create temporary schemes to enable social distancing while walking and cycling. These schemes are monitored to ensure they are work well for residents, businesses and users.

They also asked for extensive engagement activity that enabled local residents, businesses and other people to see the initial plans at local drop-in events, so that they could find out about the details and benefits of the proposals.

Over 900 people shared their views to a survey. 32 of these were local businesses of which 72 per cent did not support the scheme. Over 600 people that travel along the route responded with 66 per cent in favour. Local residents’ views were fairly evenly split for and against the plans.

Liberal Democrat councillor Lynne Stagg, who is the council’s Cabinet Member for Traffic and Transportation, said: "It’s always tricky when there are two opposing views with good points. People using the route support the cycle lanes but businesses understandably have concerns that losing parking spaces could affect them. We think we’ve struck a balance with an experimental approach of running this as a three-week trial, that gives us an opportunity to see how it works in practice and means if there is an impact on businesses it will only be short.

"We want to support businesses as much as possible but we must balance that with the need for providing better cycle routes that encourage a healthier lifestyle. We’ll get more feedback from the community during the trial and see how popular it proves when it’s in place. Feedback from businesses has already improved since we first announced the idea and we’ll keep working with them to ease their concerns.”

Elm Grove and Kings Road is a key route in the city and the council has hoped to make improvements for cyclists for some time as part of its strategy to encourage more walking and cycling in the city.

The opportunity to introduce the cycle lanes now came up as part of the government’s Emergency Active Travel Fund which can be used to make improvements to help people travel in different ways during the pandemic.

The cycle lanes will be separated from other traffic by plastic bollards attached to the road surface, providing extra protection for cyclists. It is aimed at encouraging those who have taken up cycling during lockdown to continue and the survey results showed 12 per cent of non-cyclists would consider using the cycle lanes in the future.

Current bus stops, loading bays and disabled parking on the route will stay in place and new loading areas for businesses will be created along with additional cycle parking.

Parking suspensions will be advertised from 21 October ahead of work to install the cycle lanes the following week.

Other feedback that came from the community were requests for a taxi rank in the area, improvements to Belmont Path and more trees, plants and cycle parking. The council is now looking at options for taxi rank locations and work to make Belmont Path a nicer place to walk through will start in the coming months.

For more information visit www.portsmouth.gov.uk/elmgrove and to share views once the trial scheme is in place email: [email protected] 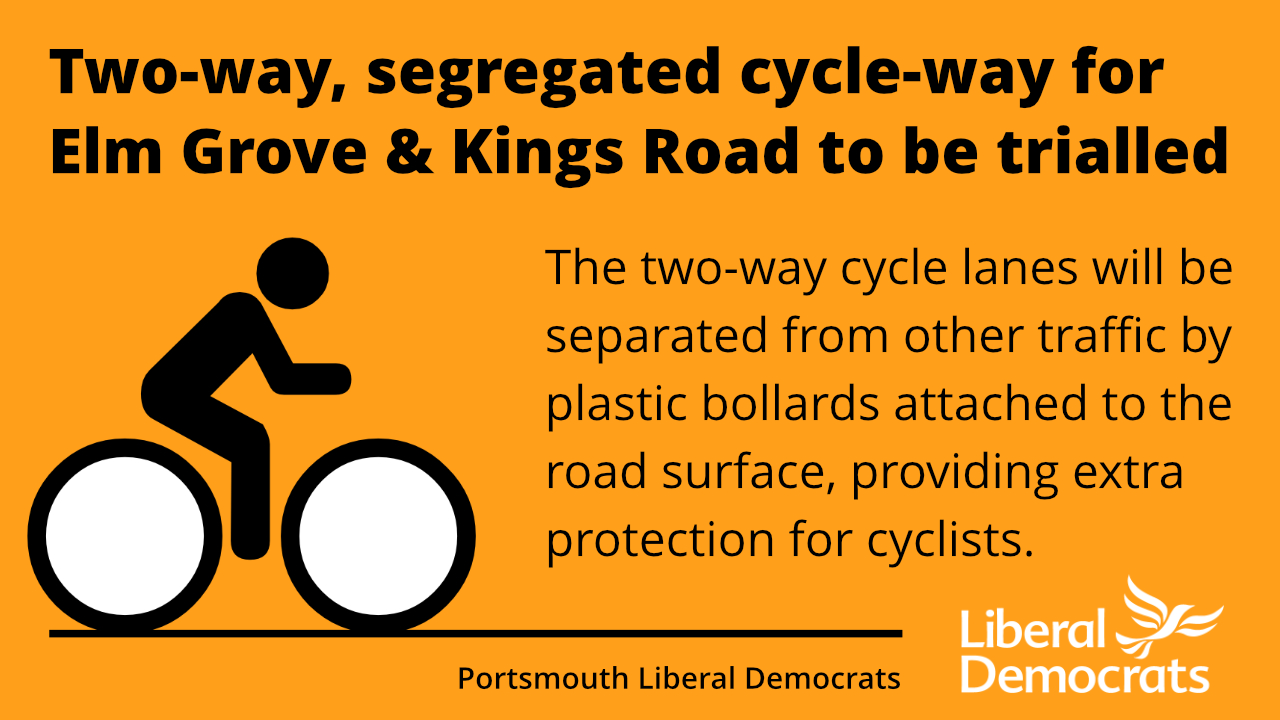