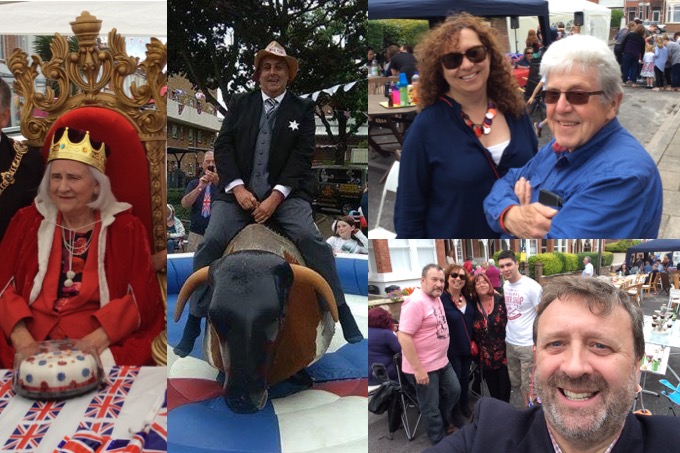 Celebrating The Queen's 90th birthday local Lib Dems across the city joined in the street party fun. From Drayton to Southsea and Portsea across to Milton residents arranged a fun family day outside their homes after streets were closed off.

Portsmouth's popular Lord Mayor, Cllr David Fuller and the Lady Mayoress Lisa Tremorin spent all day visiting as many as they could. The Lord Mayor is pictured at Duncan Road where local pub, The Phoenix, arranged a big party and at Cumberland Street where scores of residents had much fun.

Southsea Lib Dem local Councillors and community campaigners enjoyed The Phoenix party too, where Licensee Kath, her manager Paul and pub team laid on a great time for local people to enjoy. Meridian Tv were on hand to record it all; with
a local band, Southsea Fire Station Green Watch, Phoenix-style Red Arrows fly-past, BBQ and a Southsea Queen for the day, it was a great success.

Local Lib Dem Margaret Foster (Charles Dickens Ward campaigner) welcomed the Lord Mayor to a huge Cumberland Street Party in Portsea says, "The party was arranged by local residents with a hog roast and bucking bronco, which the Lord Mayor had a go on." Meanwhile Lib Dem local Councillors Suzy Horton and Lee Hunt joined in the street party fun at Rochester Road and then onto Haslemere Road, where there was a Tom Prince Cancer Trust fundraiser at the same time. "It was a wonderful day with people caring for people and sharing happiness", agreed Suzy and Lee.