We don't normally respond to petty attacks from our opponents.  However, we wanted to set the record straight after appalling misinformation is being peddled by the local Conservative Leader in letters and on social media regarding the St James’s site.

He and his colleagues have repeatedly stated that the Council bid, prepared by experienced council surveyors, was for just £1. He has said that this information was supplied by a “whistle blower” and “if true” was a serious issue.  We completely agree that if it was true, it would be a serious issue, however it is not.  What’s more, Councillor Bosher knew it wasn’t true when he delivered his letters.

THE COUNCIL BID WAS FOR £1 .... PLUS 50% PROFIT SHARE ON THE DEVELOPMENT WITH THE LANDOWNER .... and the profits could have been up to £10 million.

The Council provided several projections and a presentation to accompany the bid and the worst part about the Conservative's letter is that they imply they are waiting for proof of his claims. Yet they have been given all the paperwork.

Councillor Simon Bosher has been in receipt of the Council’s bid since 20th January. He knew exactly what was in it and he knew that what the council was proposing was a development partnership with the land owner who owns the St James’s site.

There was a very, very good reason why this approach was taken.  The Council’s bid would have meant many fewer new build homes at St James's than are currently being proposed by the developer.  The Council’s bid would also have been fully compliant with council policy and delivered around fifty affordable homes for local families on low incomes across the site.  The current proposals from the developer and the land owner are for none.

The Council’s bid would also have protected the important trees on the site - The current proposals from the developer say they will cut down dozens of valuable, mature trees.

The only way that the Council’s bid would have been able to offer a significant increase in the purchase price would be to scrap all of these things which are so important to our community. We would not do that, we could not do that.

The Conservative leader obviously doesn’t care about what will be built at St James’s - only whether the Council was prepared to pay money up front to the land owner for the site.  A site gifted by the people of Portsmouth to the NHS for health use in the 1940's.

We believe this is fundamentally wrong.  The Council's bid was based on fairly sharing profits with them and ensuring the development met the needs of the community.

We are sorry that none of these things matter to Councillor Bosher who is only interested in spreading misinformation to cause party political mischief.

This has now become a legal issue and an apology is demanded.  Meanwhile, we will keep working hard to support our local community. 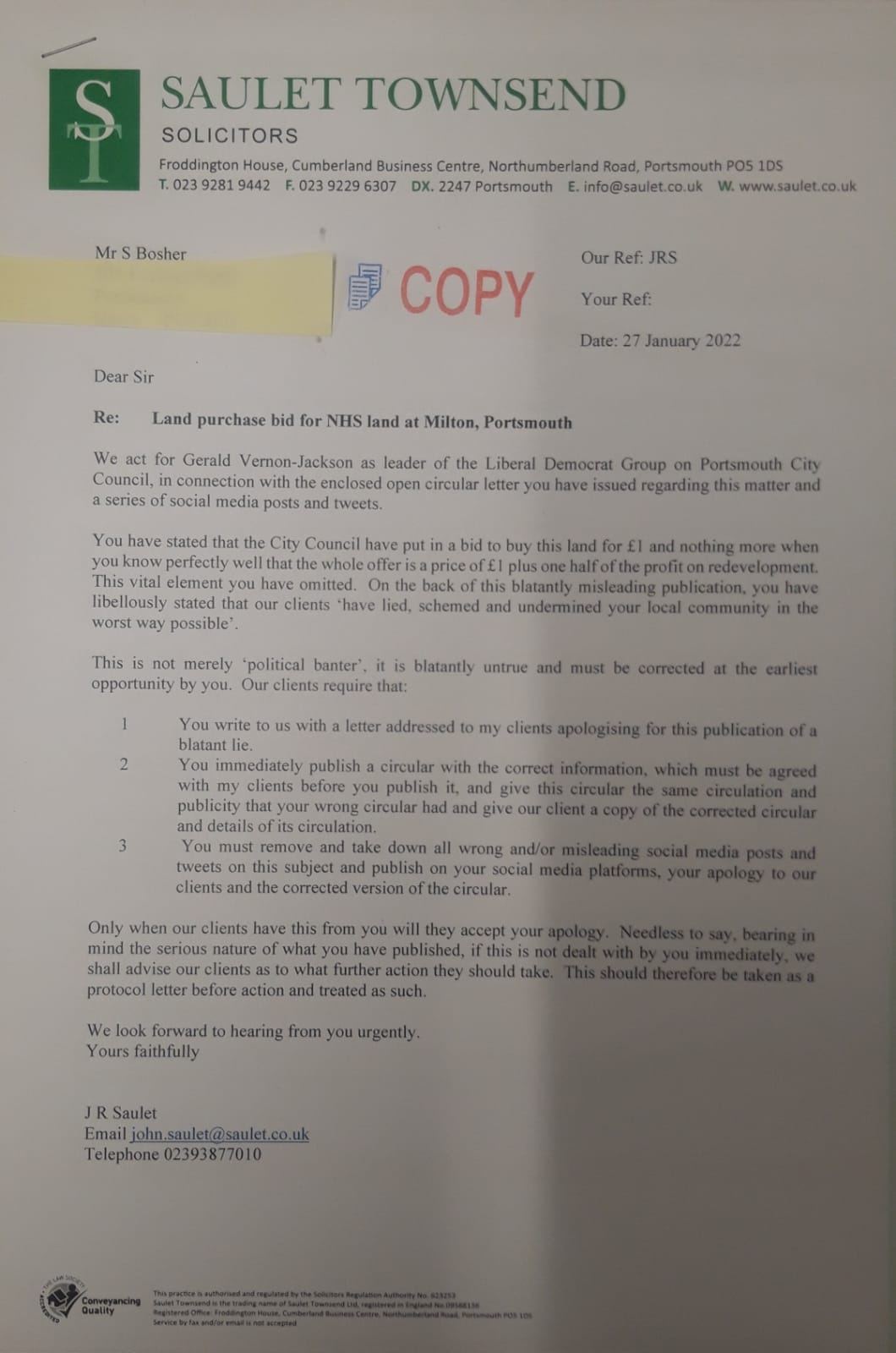