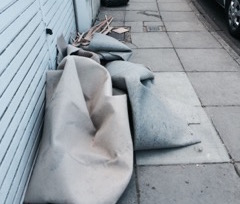 Since the Conservative-run council dumped the new team due to catch fly-tippers and 'litter louts', more and more rubbish is being chucked onto pavements, streets and open spaces. Local Lib Dem councillors and campaigners are working with local residents and businesses to combat so much rubbish dumping.

Being a densely populated area, Central Southsea is one of the hardest hit areas. Local Lib Dems are in touch with 100s of residents by email and sort out illegal dumping quickly, like the recent case in St. Augustine Road where a resident witnessed a blind person struggling to get past (pictured above). The discarded andCouncillors Lee Hunt, Suzy Horton and Steve Pitt keep in regular dumped carpet blocked over half the pavement. The local Lib Dem team caused it to be cleared the next day.