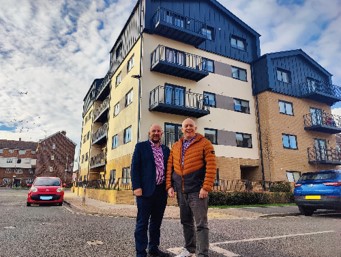 Nearly everyone recognises that we need more housing that is affordable, decent and available to those who need it.

Too many people are left on a ‘waiting list’ either homeless, ‘sofa surfing’ or crammed into relative’s homes. That is unacceptable.  So is the alternative of having to put vulnerable people up in expensive, temporary accommodation like B&B, the cost of which falls on council tax payers.

Normally, you would just build your way out of this problem. But, in the second most densely-populated part of Britain, that is tough. So Portsmouth’s Lib Dem Councillors are ‘buying back’ homes in council blocks sold off under the Tory ’right to buy’ policy, as they become available.  Almost 300 have already been bought since Lib Dems resumed running the Council and, in 2021, for the first time in a generation, the Council ended up with more council houses at the end of the year than at the start.  There are plans to buy back 500 ex-council homes by 2024.

What’s more, the Lib Dem-led council wants homes to be as green as possible. Britain’s biggest Passivhaus project – the greenest design standard - was in Somerstown. Now a pilot project to see if it can be done  more widely is taking place. This includes using high levels of insulation which radically reduces fuel bills, permanently tackling the problem of fuel poverty at source, as well as providing decent, warm homes for people to live in.

Of course, whilst all this makes financial and community sense, we must also build new council homes. The Tories had no plan to do that; the Lib Dems do. We need to increase the total stock of affordable and social housing.  This requires building new housing.

With land so limited in our crowded island city, building new homes will not be easy.  (The national Conservative Government is dreaming if it thinks Portsmouth can fit in 17,000 more homes in by 2035!).

In the short term, the Lib Dem Council has recently completed 23 new 1&2 bedroom homes in the new Albion House on the derelict site of the former Southsea Community Centra and is committed to building hundreds of new council houses, including:

But we also want private developers to honour their commitments to provide homes people can afford too.  Too often, they do not - as seen time and time again in Southsea. They say it is because they cannot afford it. That is wrong.

That is why the Lib Dem plan for St James’s Hospital includes homes people can truly afford, unlike the scheme which the property company which owns the NHS land originally wanted. That is why Lib Dem councillors worked with the developers of Kingston Prison to provide more than 150 homes Portsmouth people can afford. We want to see more homes like this in the north of the city too, especially in Cosham and Tipner.

We want to extend the principle to space historically given over to shopping and offices, as we re-shape the city for a 21st reality that includes less physical retail shopping and more working from home.

We know there is a housing crisis in this city. The Tories left Lib Dems no plan to deal with it, but we have an ambitious one, suited to our city’s needs.

Buy where we can. Build where we must. Force developers to honour their commitments.