Councillor Suzy Horton - Cabinet Member for Children, Families and Education, today updated councillors at the full council meeting with how schools in the city and the council are proceeding with the School Streets scheme - where parents and guardians are encouraged not to use cars to drop off their children by in the roads immediately outside schools.

Time was short in the meeting, so Cllr Horton had to summarise her remarks, below is her prepared response in full:

"In April 2019 the Cabinet Member for Education expressed support for the introduction of School Streets involving restrictions on traffic in roads around schools. In The News on 3rd April 2019 they were quoted saying "This is something I am really keen for us to trial. Schools I would like to be involved include Fernhurst Junior and Wimborne Junior School".

In February 2020 the Cabinet approved a report on the citywide rollout of Play Out Portsmouth which said, "Once Play Out Pompey is established and gaining momentum, the aim is to branch out into School Street closures".

What has caused the delays in trialling School Streets and will this affect any bid for funding these in the future?

Thanks for the giving me the opportunity to talk about School Streets and Play streets! 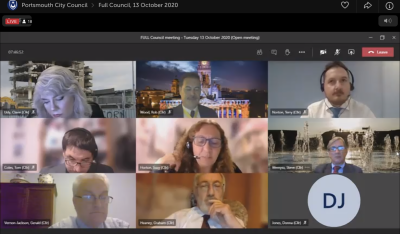 I probably don’t need to verse all the positive things about School Streets - they are good for the environment, road safety, health and wellbeing and, of course traffic flow and congestion. But with all good environmental moves that challenge car usage, they need to be brought in with careful and considered consultation and the ability to take people with you.

Whilst a school street might seem like putting a few bollards and a sign out at the start and the end of the school day, the success of them is down to several variables:

The type of school street that is put in place: - permanent, temporary, car accessible (yes, that’s a thing) or permit schemes

The capacity for resident engagement and buy-in

Obviously the support of the council and the type of engagement from the council will depend on all of the above. And of course, these things take time, as well as money.

I think that the first article you made reference to was around the time of setting up the first Play Street (very different to a School Street) which Cllr Pitt and I set up in Francis Ave with the newly established Play Out Pompey. The reason that worked is that there was enthusiasm from a local resident to trailblaze this and by all accounts across the country successes are best when led by grassroots organisations. In this particular instance, in order to expedite the process, Cllr Pitt and I paid for the liability insurance as well as setting up meetings at the council and going door to door engaging with residents. As it says in the newspaper article that you refer to, shortly after we set up a cross Portfolio meeting with FOE to discuss how we could gain community support with School Streets too. At that point in time, the 2 most recent conversations I had had with schools indicating a cautious interest were Fernhurst Junior School and Wimborne Junior School.

Unfortunately, after only 2 further Play Streets events, the scheme fell victim to the pandemic and is still restricted by the Rule of 6 although the irony of the negative impact on the physical and mental health of being locked indoors is stark. At that time there was a plan in place for the first School Street as part of a Public Health project at Arundel Park Primary Academy. For different pandemic and DfE building reasons Arundel Court, understandably, felt unable to go ahead with the trial as part of the health superzone, which is a shame as it would be in place as we speak.

But to come back to your question, I’m not sure whether there has been any delay, as apart from that one school, there was no specific programme. As you also state, there was a clear intention by Cabinet that ‘once Play Out Pompey’ was established and gaining momentum the aim is to branch out into School Street closures". That was in February 2020 and within a few weeks of that meeting we were in lockdown with schools opening to a fraction of the usual numbers of children and a vast reduction of cars on the streets.

Which brings me on to some very positive news! I’m sure we are finding some silver linings to the pandemic and the appetite for school streets by the people who are most likely to make them a success i.e the schools has increased dramatically. We took the opportunity during lockdown, when we were in weekly correspondence with all schools to conduct a preliminary consultation with primary headteachers in the form of a short online survey. This happened in July and 50% of schools responded to it.  The survey demonstrated that many schools were very interested, although there were concerns from some schools about the level of commitment and responsibility they would have to take on. The survey also highlighted the wide variety of issues in terms of types of scheme, parent behaviours, school sites, etc, and demonstrated that each school would have to be consulted individually and each School Street tailored to meet those needs. What seems to have added to the desire is that adherence to social distancing that schools need to implement as part of the Covid safety measures and there has been a further upturn in enquiries in the last few weeks. Given that this is a situation for the foreseeable future, it seems that this is a window of opportunity that we can’t miss. A clear policy needs to be developed as well as a framework for implementation and enforcement, however, this will need to be extremely flexible.

Since then, research has been undertaken to see how other local authorities have implemented Schools Streets and I attended a meeting with Southampton City Council recently who now have a number of successful school streets in operation and which have had positive benefits in terms of street safety, air pollution and supporting social distancing. Some local authorities have used the government Emergency Active Travel Fund money to roll them out and we have put in a bit for Tranche 2 money that earmarks £80k for this rollout.

An outline of what a Portsmouth programme could look like, including the costs of the scheme in terms of both revenue and capital, is currently being pulled together and needs to be realistic and have some built in success if we are to genuinely take the whole community with us in the shift towards school streets being a thing of the future across the city."