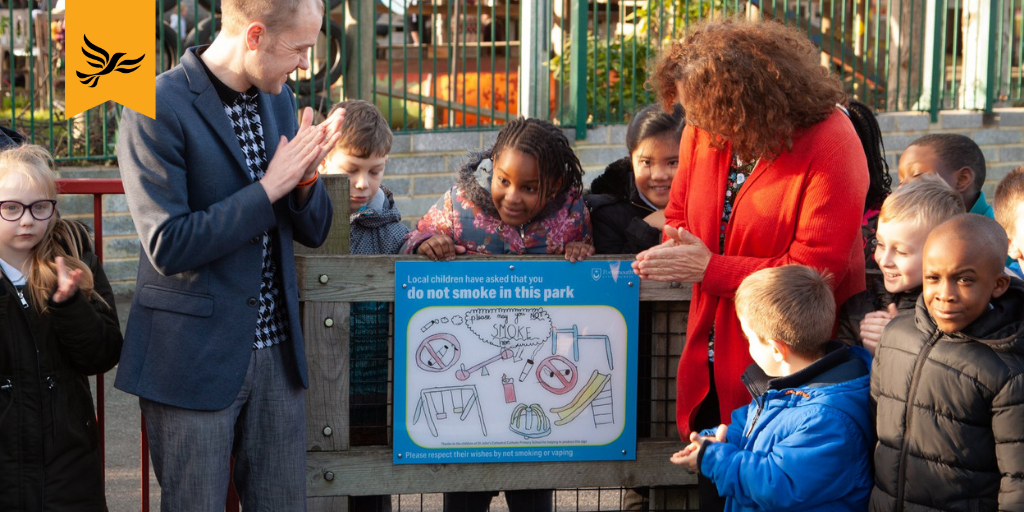 Signage has been unveiled at Landport playpark asking people not to smoke there.

This is the first park in Portsmouth to go smoke free.

This move follows consultation with visitors at the playpark, which saw 94% in favour of the park being smoke free. This support was shared by both smokers and non-smokers.

Children at nearby St John's Cathedral Catholic Primary School took part in a competition to design signage for the park asking users not to smoke there. They joined Liberal Democrat Councillors Matt Winnington and Suzy Horton to unveil signage at the park.

Cllr Matthew Winnington, Lib Dem Cabinet Member for Health, Wellbeing and Social Care at Portsmouth City Council, said; "I'm pleased to be unveiling this signage in what feels like an important step for the city. Children should be able to play in a smoke free environment and not be surrounded by smoking or vaping, which we know they may try to copy.

"It's incredibly positive that local residents using the park were so supportive of it becoming smoke free and we hope that people respect the request not to smoke or vape here. If we can see that it's having an effect then we'd be keen to roll it out across other playparks in the city to help more children enjoy themselves in a smoke free environment. "

Cllr Suzy Horton, Lib Dem Cabinet Member for Education at Portsmouth City Council, said; "It's been lovely to speak with the children from St John's Cathedral Catholic Primary School about why they'd prefer to play in a smoke free park. I'd like to thank the school and children for getting involved in this project and for all the effort the children put it to their designs. Congratulations to Marsela for producing the winning design.

"With Landport playpark being so close to several schools, it’s nice that the students will be able to come and enjoy the park without a cloud of smoke."