Councillor Dave Ashmore and Fratton campaigner Stuart Brown are thrilled to celebrate a victory for our local community by securing a planning application for housing on the ground floor of the former Connaught Arms.

Many Fratton residents will be aware, the former pub had planning permission to create a shop on the ground floor. There were lots of rumours that this may be a supermarket chain and that the local shop nearby, which has a lot of community support, would be threatened as a result.

They have continued to fight for what residents said they wanted - homes not a shop. The developer has listened to what local people and your Fratton Lib Dem team have been saying and agreed to look at putting flats on the ground floor instead. 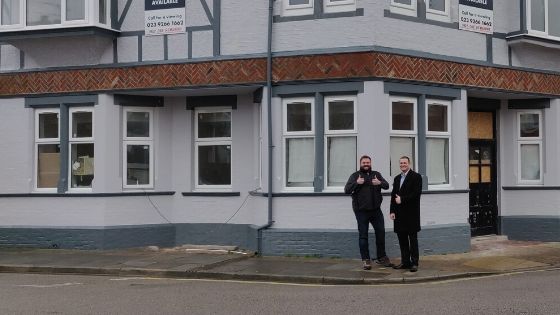 Portsmouth and have managed to get things moving again, whereas elsewhere in Hampshire, they haven’t. Dave & Stuart worked on, and as a result, the planning application to turn the ground floor into flats has now gone through.

Stuart Brown said "We wanted to thank everyone who took so much interest in this issue and the developer, who was so willing to listen to our concerns. What will now happen on the site is much more suitable for the local area and will provide homes for local people."