Community Speedwatch – back on the road 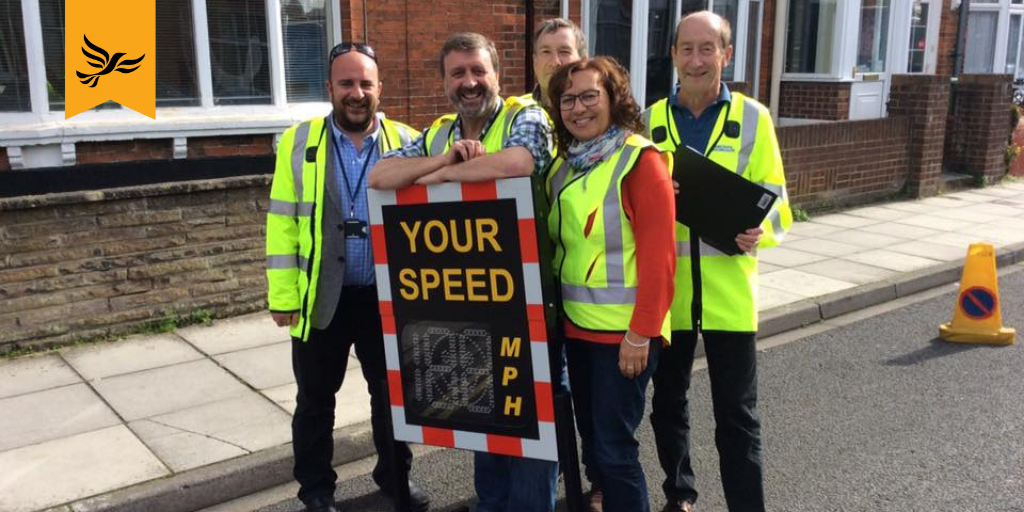 Local Lib Dems are backing two Community Speedwatch schemes in an effort to reduce the number of drivers speeding on the city's roads.

Operating in the north and the south of the city, both groups have just received brand new speed detection equipment from Portsmouth City Council’s road safety team to enable the enthusiastic speed watch groups to continue their work.

Community speedwatch is a national speed reduction initiative, and was first set up in Portsmouth in 2012. Police Support Volunteers use equipment that can monitor the speed of passing traffic and then record the details, later adding them to a database. Vehicle checks are then undertaken by the police and letters are then sent to the registered keepers advising them of their speed and reminding them of why it is a community concern. The scheme focuses on educating drivers, rather than prosecution.

All volunteers receive appropriate training, and are supported by the neighbourhood policing team. Speedwatch can only operate on roads that have been assessed by the police.

The main aims of Community Speedwatch are to reduce death and injury on the roads; improve the quality of life for local communities; reduce the speed of vehicles to the speed limit, and to increase public awareness of inappropriate speed.

Central Southsea ward Lib Dem Councillor, Suzy Horton, is involved in the south of the city operating mainly on the residential roads between Devonshire Avenue and Albert Road. Cllr Horton said. "My fellow ward councillors and I shared concerns over drivers speeding in our ward, especially in Francis Avenue. I went along to some training at Southsea Police Station, where I met police support volunteer Chris Kenyon and, together with support from a very active Police Community Support Officer, we established a bi-weekly rota from Sept 2017.

“This new equipment means we can relaunch the two schemes. We are looking forward to supporting the community once again."

Councillor Lynne Stagg (Baffins Ward), Portsmouth's Lib Dem Cabinet Member for Traffic and Transportation, said. "Road safety is of huge importance to us so we are extremely grateful to all the speedwatch volunteers and all they do to keep the people of Portsmouth safe.  Volunteers play an important role in providing data to the police, which can sometimes lead to more formal enforcement in problem areas."

The Portsmouth Community Speedwatch scheme is currently recruiting for volunteers.  If you are interested, you can find out more here: https://www.hampshire.police.uk/police-forces/hampshire-constabulary/areas/careers/careers/police-support-volunteers/community-speedwatch/