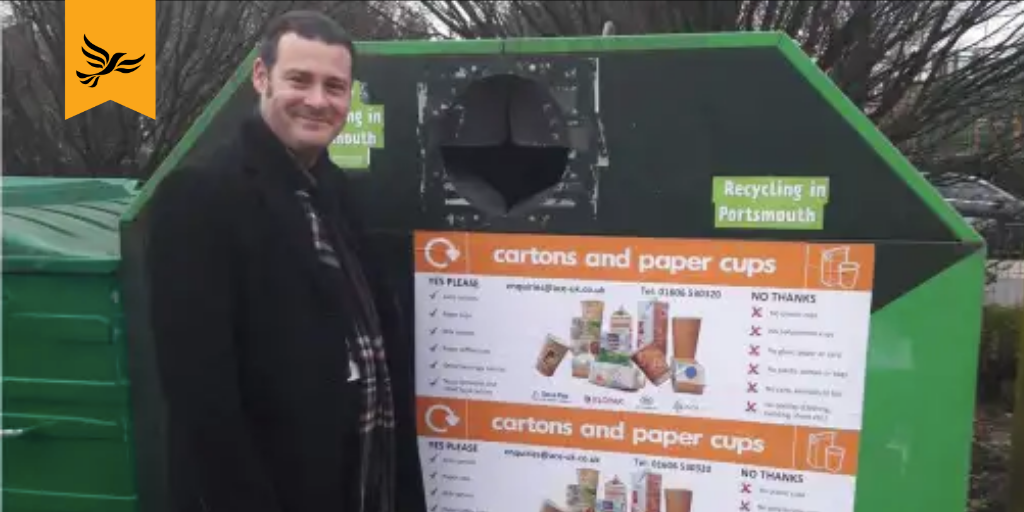 Portsmouth’s Lib Dem run council has taken another step towards a greener city, with the opening of its first carton recycling bank.

On Thursday Lib Dem councillors officially unveiled a new recycling point at the Asda in Fratton which allows for the recycling of cartons for a range of products including milk, soups and juice, also known as Tetra Paks.

Fratton Councillor Dave Ashmore, who is also the city’s new Cabinet Member for environment, was hopeful it would boost recycling in the city, something the new Lib Dem council are keen to progress.

“We want to offer people as many opportunities as possible to recycle and this is a big step in the right direction. We're aiming to keep increasing the range of products that can be recycled in the city and make it easier for residents to get involved, and we'll be announcing more carton recycling banks in the new year.”

The recycling point at Asda also boasts banks for glass, metal, textiles and plastic bottles. Earlier this year, the Lib Dem City Council introduced new black bins for general waste in a bid to reduce the amount of rubbish left out for weekly collections, increase recycling rates and help to have cleaner streets

There are various recycling points across the city for materials such as glass, textiles, batteries, plastic bottles and plastic carrier bags.

It is thought there could be 10 more carton recycling points set up in Portsmouth next year.