Everybody wins! The roll out of bike hangars

Helping more residents to cycle more is an important part of the Lib Dems’ drive for a cleaner, healthier and greener city.

That’s because cycling is generally good for the cyclist and it is good for our community.  Cycling can be fun, healthy and cheaper than using a car and when someone uses a bike instead of a car, even for just a few trips per week, it means less congestion, better air quality and fewer carbon emissions. 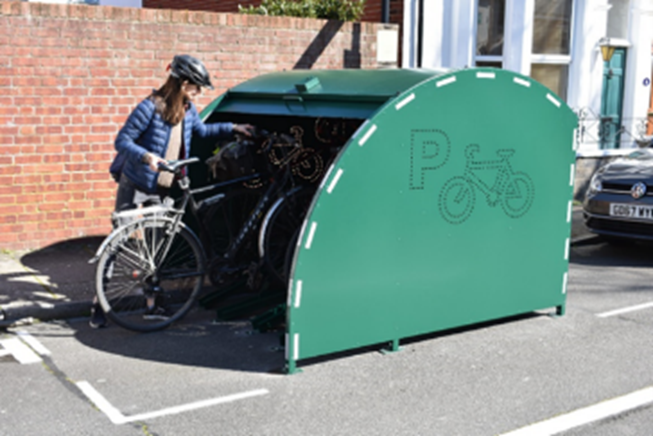 In our flat, compact island city, cycling should be a quick, attractive option for many short trips whether it is to work, the shops or just for fun.  (Of course, we also recognise cycling is not possible for everyone, nor is it realistic for every trip).

One barrier to cycling more is secure bike storage, especially if you live in a terrace house or block of flats.  It is not very convenient to have carry your bike up through your house or up some stairs and, sadly, bike theft remains an issue.

That’s why the Lib Dem Councillors have led the introduction of bike storage hangars in the city.  These are secure, lockable, covered pods which can fit between four and six cycles and can be rented for £30/year.

Bike hangars were a new idea for Portsmouth.  So, an initial pilot was quickly set up in in 8 locations in Spring 2021 to trial various formats and identify any practical issues.  Bike hangars were initially set up in 8 locations in Manners Road, Lucknow Street, Eastfield Road, Addison Road, Hunter Road, Clarence Road, Guildford Road and Sultan Road.

In July, nearby residents and users took part in a Council-run bike-hangar-project-consultation-2021/  Feedback was very positive and can be seen at the link.  With the pilot successful, the Lib Dem Council quickly decided to fund another an extra 8 locations.

To date over 200 people have written to the Council, requesting a bike hangar on their street, with the second tranche of hangars being installed near to the most requested roads.  More hangars may be deployed in the future as demand is still appears strong.  If you want to nominate your road, click here  and fill in the survey and request form.

A citywide network of ‘wheeler’ routes, complementing the road system

The Lib Dem Council is doing much more than just installing bike hangars to improve cycling and other ‘wheeler’ infrastructure across the city.

As part of an overall integrated transport plan, a citywide network of dedicated cycling routes and ‘quiet routes' is steadily being developed and sign-posted to help separate cyclists and cars as much as possible.  A map of 10 cross-city "quiet routes" shown below is here.

A good example is the route being constructed along the Eastern Rd.  This is being extensively widened to have two 1.5 metre wide cycle lanes.  This will encourage bike-commuting from off the island and create a fantastic recreational route round to Hayling island, especially in summer.

These “cycle” routes, especially the ones away from main roads, are often in practice shareable with the many other types of ‘wheelers’ out there: people with mobility scooters, wheelchair users and families with prams as well as regulated Voi scooters, rollerbladers and other recreational users.

Within the city, smaller dedicated bike parking stations are also being installed so bikes can be locked in places that encourage use, discourage theft and minimise ‘street clutter’.

You can click on the links to read more about these plans which promotes and integrates cycling within a bigger vision that includes walking, buses, trains as well as improving our use of motorised vehicles (private cars, taxis and goods vehicles etc).